A little over a mile off the coast of the San Fransisco bay stands the Alcatraz Prison on a small, singular island. The prison was notorious for being the penitentiary for the worst of the worst criminals during its hay day between the late 1800s and early 1900s. With the prison being situated so close to the shore, the inmates who spent their allotted time there were given the worst sentence of all: a clear view of the city’s skyline during their time in the “yard”. The view was the bate the inmates needed in order to plan their escapes from this maximum-security prison.

The Apostle John writes to believers with a startling assurance of Christ’s heart for those the Father gives him. In John 6:37 Jesus has just fed the 5,000. He makes a promise to his hearers that echos across time, culture, and human understanding. He promises that all those the Father gives him WILL come to him, and whoever comes to him “I will never cast out”. This is not a one time promise given upon conversion. Absolutely not. The same writer who was inspired by the Holy Spirit to write these words also wrote 1 John. The reason the Apostle writes these books is so the hearers and readers would not sin (1 John 2:1). However, he continues with the statement “if anyone does sin, we have an ADVOCATE with the Father, Jesus Christ the righteous”.

If we are to stay true to the text in 1 John, we need to understand the term “advocate” in the first-century language. The Greek word parakletos is the root word for our English word “advocate”. It is a legal term, which basically means a lawyer who gives evidence that stands up in court. However, this lawyer we have in Christ, this advocate, is not giving evidence of our right standing or our goodness. No. He stands as One who gives an account of his sinlessness. He gives an account for his perfection, not ours. When our advocate does this, he pleads our case before the Father and propitiates the wrath of God by covering us with his own righteousness. Our advocate stands in our place, receives the full punishment we deserved, and then GIVES us his perfection so we would be with him for eternity. What qualifies us to receive this mercy and grace from our older brother? Our sin. We will sin. We will sin big. We will devastatingly sin. But when we do, we have an advocate. We have one whose heart and desire is that any who come to him he will not cast out. He won’t cast you out. He does not lie. Who is Christ an advocate for? Anyone. Anyone who will but come to him.

I’ve spent years being the worst of the worst. I am not without sin, and it is only by my regenerate heart that I can even feel a hatred toward the sin I once loved. It is only by the advocacy of Jesus that he could ever take me off the island of Alcatraz, in spite of my deserving to be here. It has taken me a year to understand the concept of Christ’s advocacy for me. I stood, a child of God, gazing longingly at the city skyline for freedom believing the prison I held myself in for my sin was just. He took the boat of his advocacy to my island prison and brought me back to shore. Back to community, Back to the city, Back to freedom. His heart longs to forgive me. I tried planning my escape on my own, but it wasn’t until I saw the Lover of my soul in all his beautiful advocacy for me, did I understand how he alone offers true freedom free of drowning in the sea of justifying my sin.

Alcatraz was eventually closed in March of 1963 due to its deteriorating conditions by the salt spray damage from the bay water and the high expense for each inmate to be held there. While most prison costs were $3 per inmate, Alcatraz’s was a staggering $10 per inmate. Due to shame and guilt of our sin, we often try to hold ourselves hostage in the prison of our own minds. The cost is high to keep it running (mental, emotional, and spiritual health), and the walls are deteriorating anyway. Why not close it down? We have an advocate, a lawyer for the worst of the worst, and he hasn’t lost a case yet. Your case is no different. 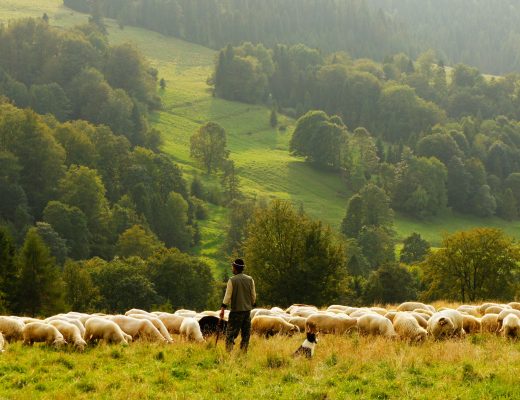 The Shepherd, the Light, and Hoping in the Dark