I’ve been around enough pregnant women to know they stress about their birth plan. They make lists, demands, and even do strange rituals in order to ready their bodies, their tribes, and their medical staff for the day of arrival of their babes. Perhaps the need to control their environment and calendars is motivated by fear that something might happen during birth, thus causing disappointment and extenuated fears of failure when their birth plan doesn’t go as well as they had hoped. Or, it could just be the need to have order in the midst of the chaos of the unexpected. We love a good story, a happy ending, and details that keep us on the edge of our seats especially when it comes to major events in our lives like bringing a child into the world. The celebritized baby gender reveal parties, and Pinteresty baby announcement pictures only add fuel to the fire as we wait for the dopamine to hit our brains with each “like” we receive on social media for our creative self expressive ways we announce a pregnancy. We make bringing a child into the world more about ourselves than the beauty of the Story Teller. It has always been humbling to me how Mary, the mother of Jesus, could hardly speak when she was told of the growing Christ child developing in her womb. The details, the mystery, the awe too much for her mouth to produce any formulated sentence to announce this coming baby. I realize her situation was quite scandalous being a young unmarried girl in the ancient near east, however her response was the act of pondering. She was left to ponder the mysterious news of the world’s greatest pregnancy. Scripture speaks of this act of pondering she did as a response to the gift she was given rather than the announcement she felt like she needed to make about his coming. However, God the Father did the announcing. And my goodness, what an announcement of Christ’s birth it was.

My son’s birth story started before I even knew he was being formed in his mother’s womb. I didn’t have a birth plan. Shoot, I never had an adoption plan. I never saw the two pink lines on the pregnancy test. I never had the moment of overwhelming excitement knowing my efforts of baby-making had come to fruition. I never felt his tiny body moving wildly inside of me. I never experienced the pain of childbirth, bearing down with the force of superhero strength to birth him from my body. I never felt the rush of oxytocin release from my brain to form an immediate bond. My husband never cut the umbilical cord, we never went to an appointment to hear his first flutters of a heartbeat, and I never heard his whimpers of life’s first breath entering his lungs, never. Yet, somehow he’s my son.

We received a call from an attorney in our community who had helped us figure out some legal jargon regarding a previous adoption we were pursuing. As that fell through, this attorney kept our contact information. I received a phone call from her late on a Thursday evening a year later. She told us there was an 8-month-old baby boy who needed an immediate placement for adoption and proceeded to ask if we would be interested. The pink lines. We prayed about it and on Sunday of the same week, we met his courageous and beautiful birth mother. She placed Jonathan in my arms, tired, worn out, spent from the months of homelessness and exposure to the world. The first flutters of a heartbeat, the gender reveal, the first cries, the oxytocin flowing to formulate an immediate bond. I began rocking him immediately and spoke tenderly over him singing a song I learned from my mother. He fell asleep to the comfort I offered as he rested against my chest. His birth mother looked at me with a tear in her eye and said, “I don’t do that. You’re good at that. He likes it”. She, a woman who chose life for this child, speaking affirmations of my mothering over me. This kind of strength, the strength it takes to affirm another woman’s abilities to mother your child in the face of a decision that will change the course of eternity, was utterly profound to me. She chose us that day. The following Friday we brought him home and just five days later we were now prancing around town as a family of three.

There are parts of my son’s birth story I will never know. He will never know. There are experiences, situations, and details surrounding it I will never be able to answer when I am asked one day. But just like Mary, the mystery of it all will hopefully cause both my son and me to ponder in our hearts how God could have possibly brought us together to form a family. I believe he is the sole reason God moved us from the comfort of our lives in Cincinnati, our familial bonds that far exceeded biology, stripped us of all we thought was good, and laid Jonathan Ryan in our laps. Literally.

With the adoption date approaching, my prayer for the last 12 years has been for God to receive the glory from our barrenness. For the world to see and know the goodness of God, not in providing a child for us, but for doing far abundantly more than we could ever ask or think, for what he’s going to do through this precious little man. I have prayed for 12 years for our children to be tender to the gospel as they hear it. I have prayed the Holy Spirit would quicken his heart to believe by faith Jesus is Lord. Our spiritual children, our adopted children, all have proven God has answered those prayers. Now we wait for the salvation of our son. Until then, I will continue to ponder. 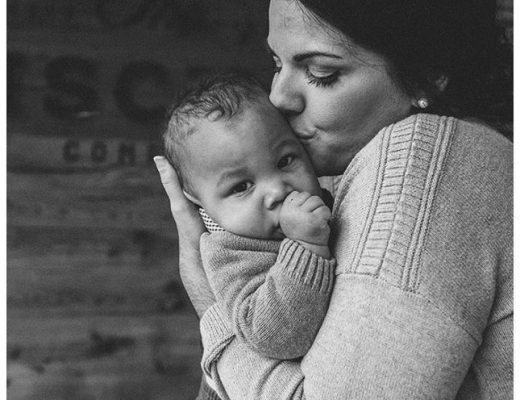 To Love You My Son

Adoption and the Heart of God: Plan A. Not Plan B.